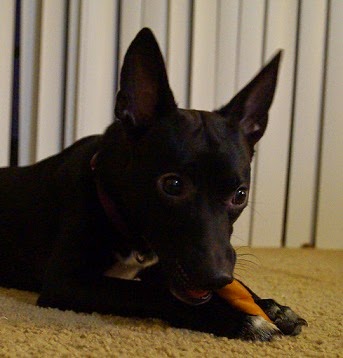 I have never had a dog that was a fussy eater. Until now. Willy is choosy with his food and his treats. I know that a happy dog is one that gets plenty of playtime and exercise but it has been a challenge to find appropriate chew toys for him. Then I found Hartz Oinkies and one problem is solved.


Dog toys that are too soft

There are dog toys that he shreds in a similar manner. I've had dogs that can peel tennis balls or shred the tug ropes, but not as quickly as he can.  I've stopped giving him tug ropes due to the same concern I have about the strings from towels.

Dog toys that are too hard


Willy's teeth are incredibly sharp and strong. I have never met a dog with such sharp teeth. He can bite through a thin leash in just a few moments.  Because of my concerns with soft toys, I opted to give him very hard toys. I've given him antlers, rib bones, and hooves.  He loves them!  But it doesn't take long until he is somehow chiseling off very sharp pieces.  I can't imagine that ingesting the bone or hoof shards is good for his digestive tract either.  So I give bones or hooves to him only when I'm supervising.


He likes large rubber treat dispensers and they like him. But finding a treat that keeps his interest, to put in the treat dispenser, is the problem. I have purchased bags of treats that he won't even eat from my hand.  Have I mentioned that he's a fussy dog? 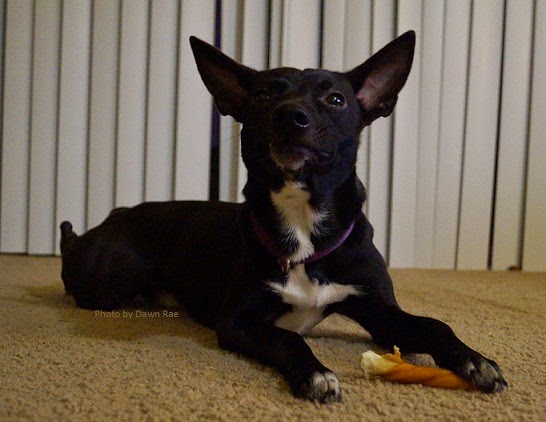 Chew treats that are just right

Rejoice!  I have finally found a chew treat that seems to be just right. The Hartz Oinkies have a flavor that interests him (a rare thing).  He does chew and eventually eat the Oinkies pig skins, but he does so slowly. And unlike some rawhides, they don't seem to irritate his stomach.

I was very hesitant about giving him yet another rawhide, since he has thrown up after eating previous rawhides. But for whatever reason, the Oinkies don't come back up.

If you are looking for a chew toy for a finicky dog, I highly recommend the Hartz Oinkies.

Disclaimer: In affiliation with Amazon.com, Dawn Rae is a content writer who may earn compensation from the sale of these products
Posted by Dawn Rae at 5:18 PM

Dawn Rae
Dawn Rae is a woman who enjoys a variety of things in life. These things include anything that involves the use of her Jeep Wrangler, mid-Atlantic travel, reading, writing, her furbabies, and being the best long-distance gramma that she can be. In 2015, she purchased a few acres of land on a West Virginia ridge and is looking forward to retirement at "The Shack". ------ Dawn Rae is a participant in a variety of affiliate programs (Amazon, Zazzle, Etsy, and more). If you order via an affiliate link on this site, she may earn some compensation - at no cost to you. For full information and disclosures, see below. ------ Dawn Rae appreciates every visit and every view. Thank you for joining her on her adventures.

My expertise -- I am expert only in my own life and I write about things that make me feel; good or bad. I sometimes write about products that I own, love, or covet (usually because a friend owns it and I can't wait to own it too). I write about things that I'd like others to know about.
Payments -- Some pages in the blog contain affiliate links (Amazon, Zazzle, etc). I may receive a small commission when a product is purchased through these links - at No Additional Charge to you, the purchaser. I choose my affiliates from companies I do business with. Thank you to all who make purchases using links found on my blog.
Thus far, I have not received any items or offers of payments to do reviews. If that ever happens, and someone wants my opinion that much, I will surely let you know!
Advertising -- I am giving adsense a try and allow some adsense space on my blog. I have not necessarily tried or recommend the products offered in those ads. I plan to keep that outside advertising at a minimum.
Cookies -- A cookie is a small file which asks permission to be place on your computer's hard drive. That file helps analyze web traffic or lets you know when you visit a particular site.
You can choose to accept or decline cookies. Most web browsers automatically accept cookies, but you can usually modify your browser setting to decline cookies if you prefer. This may prevent you from taking full advantage of websites (mine and others).
Privacy -- I do not share personal information (such as your email, if you leave it) with third parties nor do I share information that is collected about your visit to this blog for use other than to analyze content performance (i.e. what readers like, visit most often, and etc.). I am not responsible for the republishing of the content found on this blog on other websites or media without my/your permission.
Children - This articles on this site are written for adults. I do not gear my articles toward children.